The depository for radioactive tailings

The radioactive tailing pond in Sillamäe is located in the Ida-Viru county, in the western part of Sillamäe, directly on the coast of the Gulf of Finland. The depository is located on a territory of approximately 40 hectares and contains about 12 million tons of uranium process tailings and oil shale ashes, deposited there since the secrete uranium production factory of the Soviet Union was established in 1948. 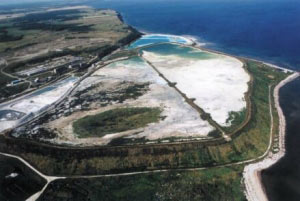 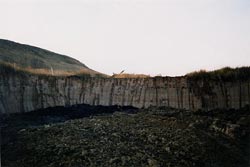 Poisonous and dangerous refuse – greyish brown slurry, containing uranium and heavy metals, acids and other chemicals – remains from the processing of the uranium ore, both dictyonema shale and up to 100 times richer ore, later imported from the Eastern countries.

12 million tons of these substances – uranium refuse mixed with oil-shale ashes make up the “Uranium Lake” of Sillamäe.

During years and decades the substance consolidates and changes into a clay-like (clayish) mass. In Sillamäe, it has happened partially: there are places where one can walk on the surface lake and places where a stone, thrown there disappears immediately. 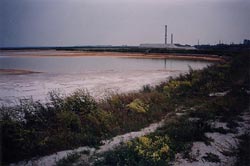 Sillamäe depository is located immediately by the sea. The seaside dam is not farther than 30 to 50 meters from the waterfront.

Research has proved that there exist both hazards: direct – constantly spreading pollution – and indirect – the seaside dam of the depository is instable and may break.

The pollution spreads from the depository in three different ways:

In case the seaside embankment breaks, incalculable quantity of dangerous substances may flow into the sea.

History of the project

The restructuring project of Sillamäe refuse depository was launched by the Republic of Estonia in co-operation with Silmet Grupp Ltd. in the summer of 1997, when in the framework of EU Phare Environment program pilot project an application for the development of technical project for restructuring (cost approx. 7 million EEK) was submitted.

In co-operation with Los Alamos State Laboratory an international technical conference was arranged for preparation of the projecting work. The conference, being financed and supported by NATO, took place in Tallinn, at the National Library from Oct 4 to 9, 1998. Representatives from 13 countries attended the conference.

In spring 1998 the pilot project application, submitted to Phare Environment Program was approved and Wismut GmbH won the international bidding for designer.

In July 1999 the European Commission approved the application of the Republic of Estonia to finance the restructuring project of Sillamäe refuse depository in the extent of 25% (5 million EUR) form the funds of Phare LSIF and on Dec 23, 1999 the final protocol between the Republic of Estonia and the European Commission about financing the project was signed.

On October 13, 1999 the Minister of Environment of Estonia, the representatives of the governments of the Nordic Countries and the Financial Corporation of the Nordic Countries together with the executives of Silmet Grupp Ltd. and Ökosil Ltd. signed the contract about the restructuring project of refusal depository in Sillamäe. The contract estimates liquidation of one the most dangerous and talked about pollution object over the decades by 2006.

This website uses cookies to improve your experience while you navigate through the website. Out of these cookies, the cookies that are categorized as necessary are stored on your browser as they are essential for the working of basic functionalities of the website. We also use third-party cookies that help us analyze and understand how you use this website. These cookies will be stored in your browser only with your consent. You also have the option to opt-out of these cookies. But opting out of some of these cookies may have an effect on your browsing experience.
Necessary Always Enabled
Necessary cookies are absolutely essential for the website to function properly. This category only includes cookies that ensures basic functionalities and security features of the website. These cookies do not store any personal information.
Non-necessary
Any cookies that may not be particularly necessary for the website to function and is used specifically to collect user personal data via analytics, ads, other embedded contents are termed as non-necessary cookies. It is mandatory to procure user consent prior to running these cookies on your website.
SAVE & ACCEPT